A boy spotted begging in  Hampi, a  world heritage site in Karnataka, dress to look like a Hanuman is a Hindu deity,  a central character in the Indian epic Ramayana .

Friends greeting each other at a restaurant on the eve of Ramadan, near Jama Masjid while some waiting for food, feeding the poor on Ramadan. more images

Mahayana material offerings might be imbued with the following symbology, the lighting of a candle or an oil lamp represents the light of wisdom illuminating the darkness of ignorance.

remembering Trissur pooram on a rainy day in 2005 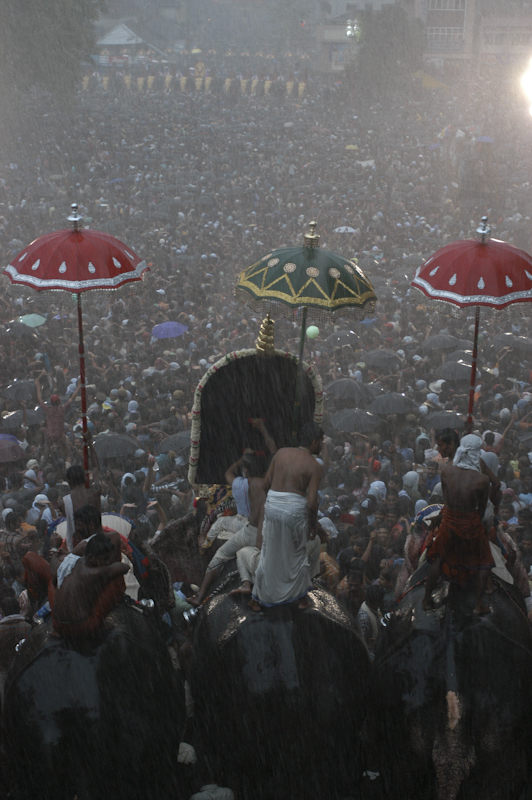 It was after a long time I went to cover the world largest ritual performance  called Pooram, it performed in Vadukkumnatha temple in Trissur, Kerala. As per my plans i found the wonderful position to shoot. Its an Asias biggest event perform annually.

The moderate showers that started around 2 p.m. on Wednesday could not dampen the spirits of the scintillating percussion concert `Elanjithara Melam’ held around that time.

Later when heavy rain, accompanied by gusty winds lashed the city just after the beginning of the `Kudamattam’ (exchange of parasols) in the afternoon, they went on dancing, cheerfully yelling and waving their hands each time a set of parasols were exchanged by the friendly rivals of the Pooram, the Thiruvambady and Paramekkavu Devaswoms.

Hanumman statue, a photo by Gireesh G V on Flickr.

Man,  sitting for a hair cutting/ shaving with a footpath barber , a scene from New Delhi streets

“Self-realization is the knowing – in body, mind, and soul – that we are one with the omnipresence of God; that we do not have to pray that it come to us, that we are not merely near it at all times, but that God’s omnipresence is our omnipresence; that we are just as much a part of Him now as we ever will be. All we have to do is improve our knowing.” :- Yogananda Paramahansa